Anupam
Apr 3, 2018
Last week, Xiaomi announced the release of MIUI 9.5 and released the timeframe as to when it would be rolling out the update to its devices. Despite being a point release, MIUI 9.5 brings plenty of new features and enhancements to the table. This includes improvements to the Gallery app, a vastly superior notification shade experience, and other enhancements to the system apps.
There are other new features in MIUI 9.5 which is aimed at improving the overall user experience and fixing the pain points with the OS. This will also likely be the last major release of MIUI from Xiaomi before it showcases MIUI 10 later this year. 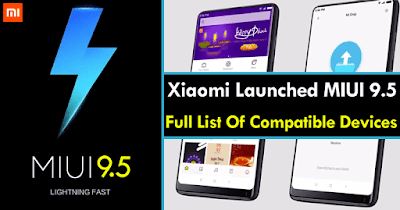 List of devices that will get this MIUI 9.5 update

As we say, these improvements are focused on Xiaomi devices that have Android 7.0 Nougat. According to this forum thread of MIUI, the update has already been released for a handful of devices, which are:-
These are the devices that throughout these days will receive the update via OTA, therefore, the owners of these devices should check for the updates and be attentive to OTA. The list for the rest of devices will work in the following way.

By the beginning of April, these devices will receive the MIUI 9.5 update:-

As we can see, the earliest updates are reserved for the devices with the most expansion for now, which are the Redmi 4 and the Redmi 3. They have left a long time of testing for the bulk of devices on which the Xiaomi Mi 5 and Mi 6, in addition to the Mi MIX 2.
And finally, by mid-April, we have the list of older or less relevant devices, such as the Xiaomi Mi 5S or the Redmi Note 2 and Mi Note 3. It should be noted that devices as old as Mi 3 and Mi 4 will also receive this update from Xiaomi.
So, what do you think about this? Simply share all your thoughts and opinions in the comment section below.