The British physicist Stephen Hawking completed a mathematical procedure to identify the existence of parallel universes just two weeks before his death.
Hawking signs together with Thomas Hertog, of the Institute of Theoretical Physics of Louvain (Belgium), a study that has not yet been published in any scientific journal after being submitted to a peer review process, although it can already be consulted in a file Online from Cornell University (USA). 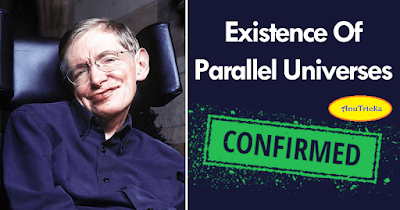 The world-renowned British Physicist, who died peacefully on March 14, set out the mathematical calculation required by a space probe to find the scientific proofs that could confirm the existence of “multiverse.”
The paper, called “A Smooth Exit from Eternal Inflation,” challenges an issue that had bothered Hawking ever since he devised the “no-boundary” theory with James Hartle.

In the “no boundary theory,” the duo had described how our Earth exploded into existence during Big Bang.
But Hawking was bothered by the fact that the theory also posits that the event was accompanied by an infinite number of other “Big Bangs,” each resulting in a separate universe.
His final paper aims at finding these parallel universes with the help of probes on spaceships. This research paper also predicts the end of our universe and how it would eventually fade into blackness as all its stars run out of energy.
Hawking had already predicted the ultimate fate of our planet in the next 100 years and proposed the need to find other planets where life could sustain.
The professor had posited several other theories like this and has been often nominated for the Nobel Prize. But as the award is not awarded posthumously, Hawking is now ineligible to receive it.
So, what do you think about this? Simply share all your thoughts and opinions in the comment section below.
#News #Trending
Share it