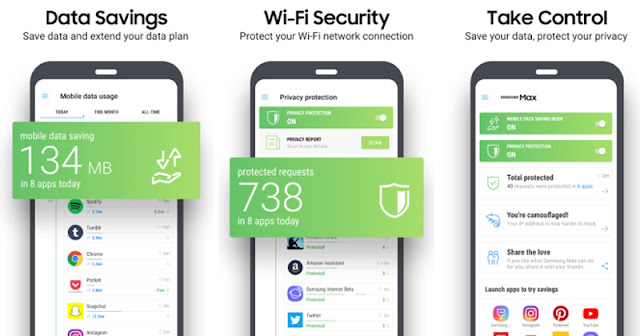 Whenever we talk about smartphone brands, Samsung is the first one that hits our mind. Samsung is known for producing mid to high-end smartphone. It looks like Samsung is joining the app section.

Recently, the South Korean giant Samsung launched a new Android app for its line of Galaxy Smartphones known as Samsung Max. Well, the app does the same thing what Opera Max used to do.

The new app from Samsung is known as Samsung Max and it compresses the data received by the web. Compressing the data help users to save some extra data.


As we already mentioned, Samsung Max is nothing more than a reprint of the Opera Max application. So, it also works the way Opera Max does. Samsung Max creates a VPN on the smartphone to compress images, music, and videos.


Moreover, Samsung Max also has WiFi data encryption feature and “Anonymous Mode”. Anonymous mode on Samsung max prevents web crawling. However, its worth to note that the app is developed by Samsung, so, it will only work on Galaxy Smartphones.


If you hold a Samsung Galaxy Device, then you need to head over to the Google Play Storeto download. If you are running Opera Max then you will about to receive the update for Samsung Max soon.

What’re your views on Samsung Max? Discuss with us in the comments.