How To Add Double Tap Screen On and Off Feature On Any Android: Have you ever used LG Smartphones? They have an awesome feature that is known as “KnockOn”. Knock On is basically a feature that helps Android users to lock their screen by just tapping on the screen.

With KnockOn feature, Android users just need to double tap on their Android screen to turn off the display and the same thing needs to be applied to turn on the display.

This feature is very useful because this doesn’t require an additional power button to turn on/off an Android display. Here in this article, we are going to explore a trick that will help you to get the “Double Tap to Wake” feature on any Android device.

We are going to use an app that is known as Smart Screen on/off which is designed to turn On or Off your Android display by using the proximity sensor. Here’s how you can use Smart Screen On/Off app.

1) Download and install Smart Screen On/Off app on your Android smartphone and launch the app.

2) Now you need to grant few permissions. Just grant all the permissions to enter the main interface of the app
3) On the main screen, you need to turn on the “Enable” option.

4) Scroll down and then enable the option “Double Tap To Turn Off Screen”.
5) Now under the Optimization settings, you need to toggle on the option “Optimization for proximity sensor”. 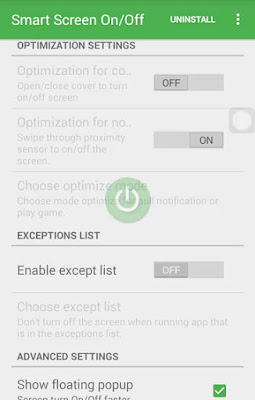 Now Press the home button on your Android device and test the app. Just slide your hands through the Proximity sensor to turn on/off the screen. You can also double tap on your android screen to turn off the display.

This is how you can enable double tap to wake up or turn off feature on your Android device. Hope this article helped you share it as much as possible.

Tags: Android Tricks, How to