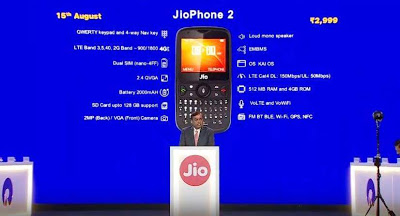 Jio Phone 2 has been unveiled by Reliance Industries as an update to the model the company launched last year. The new Jio Phone 2 features a QWERTY keyboard and a 2.4-inch QVGA display panel, an upgrade over the alphanumeric keypad and small display of the predecessor. Jio also announced that both the new model and the original Jio Phone will support popular apps WhatsApp and YouTube starting August 15. Both the handsets will be available simultaneously in the market together. And unlike last year, buyers will not have to wait for weeks on end to register to purchase the device, as it will be up for grabs starting August 15 itself. Jio Phone users who wish to upgrade to the new model will also have the option to switch at a lower price.


The Jio Phone 2 price in India is Rs. 2,999, though the company says this is an introductory pricing. As mentioned above, the handset will be up for grabs starting August 15. RIL Chairman Mukesh Ambani also announced the Jio Phone Monsoon Hungama offer that will allow existing feature phone users to exchange their current device for the Jio Phone for just for Rs. 501. This offer will start from July 21. 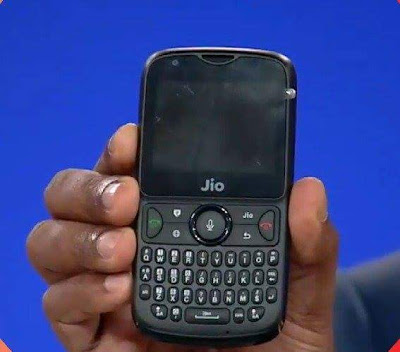 The Jio Phone 2 supports dual-SIM slots (Nano), and has a 2.4-inch QVGA display. It runs on KAI OS, and has a 512MB RAM and 4GB of internal storage. This can be expandable with the help of an SD card (up to 128GB). With optics, this phone integrates a 2-megapixel back and a VGA front camera sensor. Battery is at 2000mAh, and connectivity options include VoLTE, VoWiFi, NFC, GPS, Bluetooth, and FM radio. It supports LTE Cat4 DL: 150Mbps/UL: 50Mbps, and LTE Band 2,5,40, 2G Band 900/1800. Apart from the QWERTY keypad, the Jio Phone 2 also has a four way navigation key and a dedicated button for voice command, just like the Jio Phone.ALSO SEEJio GigaFiber Launching in 1,100 Cities, WhatsApp Coming to Jio PhonesGoogle introduced Google Assistant on Jio Phone earlier, and now it has extended support for YouTube as well. Facebook has also seen potential in the feature phone, and has extended support for WhatsApp for Jio Phone users.